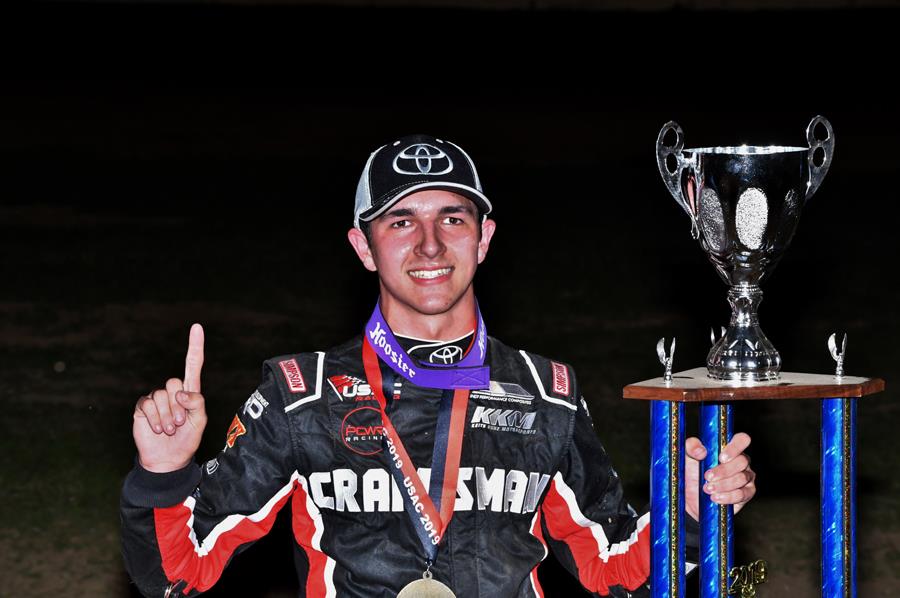 By Richie Murray, USAC Media (Sweet Springs, MO) -- Most times, it seems the only thing predictable in USAC NOS Energy Drink National Midget racing is unpredictability. And sometimes when you think you know what's about to transpire, that's when everything turns on its head. At times, literally.

Lincoln, California's Tanner Carrick found that out in Sunday's trip to Missouri's Sweet Springs Motorsports Complex where he became the fourth first-time series winner this year, following Cannon McIntosh, Chris Windom and Jason McDougal. It's the first time the series has produced four first-time winners in a single season since 2008, and it's still only mid-July.

Carrick ran fifth with five laps remaining as point leader and race leader Tyler Courtney and defending champ Logan Seavey waged their battle for the lead. Seavey mustered a big, bold slider for the lead entering turn three. Courtney quickly countered underneath to steal the spot back from Seavey off turn four.

Seavey remained just about three car-lengths back on the following lap until his car got a bit tight on the cushion in between turns three and four, allowing Courtney to open up a roughly eight car-length lead despite catching the lapped car of Brady Bacon in traffic as he worked turns one and two.

Traffic parted the seas for Courtney with a free path on the high side entering turn three. With seemingly everything in check, Courtney snagged the turn three cushion, flipping him over. On Courtney's rebound, second-running Logan Seavey clipped his own right front wheel against Courtney's tail tank, giving terminal damage to Seavey's car and eliminating him from a repeat Sweet Springs victory. Courtney restarted, albeit from the tail and out of contention for his seventh series win of the year.

That slotted Carrick into third on the final restart behind McDougal and Windom. Throughout much of the duration of the 40-lapper, Carrick had been waging in a see-saw slider session behind Courtney and Seavey, battling the likes of McDougal, Windom and Kevin Thomas, Jr., just to name a few, for what, at the time, seemed to be for "best in class" for third as the front two checked out.

On the lap 38 restart, McDougal went topside as Windom headed to the bottom to toss a slider at McDougal. Windom appeared to not have enough mustard on the slide to get up in front of McDougal but was content to fall in line and chase him into the next corner. Before all that could even play out, McDougal's right rear snagged the turn two cushion, turning him to the right and pushing him into the outside wall.

Windom ducked under McDougal to take the lead momentarily heading down the back straightaway. Yet, even lower on the track was Carrick, who used the bottom to pull ahead of Windom at the entrance to turn three. Carrick slid up in front of Windom to the top, while Windom charged to the bottom as Carrick nipped Windom at the stripe by three-quarters of a car length.

"I just wanted to be there at the end," Seavey said. "I saved my stuff. I kind of figured (Windom) was going to try to slide McDougal (on the restart). My only odds were rolling the bottom on the last restart and getting to the lead. and it worked out."

Carrick was on a mission to take away Windom's line and prevent the slider into the first turn as he dove across the nose of Windom to secure the bottom before sliding up to the top in turn two as Windom had the front left wheel kicking up a little dust on the inner berm.

Carrick was meticulous in sliding himself into each corner from bottom to top, leaving Windom and hard-charging Zeb Wise a narrow window of opportunity that Carrick had no intentions of relinquishing.

Carrick, the 2017 series Rookie of the Year in his 54th career start, finished it out with authority for his first career series win. Wise, who returned from an opening lap flip, rode the rim around Windom on the final lap to take second by two car-lengths over Windom, while McDougal fell to fourth and Chad Boat rounded out the top-five after starting 15th.

Carrick and his Keith Kunz-Curb-Agajanian/Craftsman - CVC Concrete/Bullet by Spike/Speedway Toyota had been fast of late, entering Sunday night's triumph. Just two weeks ago, Carrick drove to a career-best-equaling third-place result in Joliet, Ill. after establishing a new eight-lap track record during the heat race. He set a new 10-lap track record Friday's heat in Fairbury, Neb., followed by a 7th place feature finish Saturday at Fairbury. The speed has been there, but the results they've been striving for these past three years finally came to fruition.

"It means a lot to me getting a win for (crew members) Big Al (Scroggins), for Ronnie (Gardner), for Keith Kunz, everyone that helps out on the team. We've been really close. I've been really close lately. I could say there's numerous races I should've won but didn't play out my way, but this one did."

Despite the dramatic finish, the feature arrived with inauspicious beginnings initially. The first of two red flags came out on lap one as front row starters Seavey and Andrew Layser banged wheels on the back straightaway, creating a chain reaction of events entering the third turn.

As Layser fought to regain control, McDougal slowed to avoid Layser. In turn, sixth-starting Tanner Thorson ramped over McDougal's left side wheels and flipped. Wise, who started 9th, plowed in and hit Thorson, sending himself flipping as well. Ethan Mitchell was also collected in the mishap. Thorson did not restart and, ultimately, finished 23rd.

Curtis Spicer flipped in turn two on the second lap. Spicer's car went off on the hook and he was finished for the night, taking a 22nd place finish.