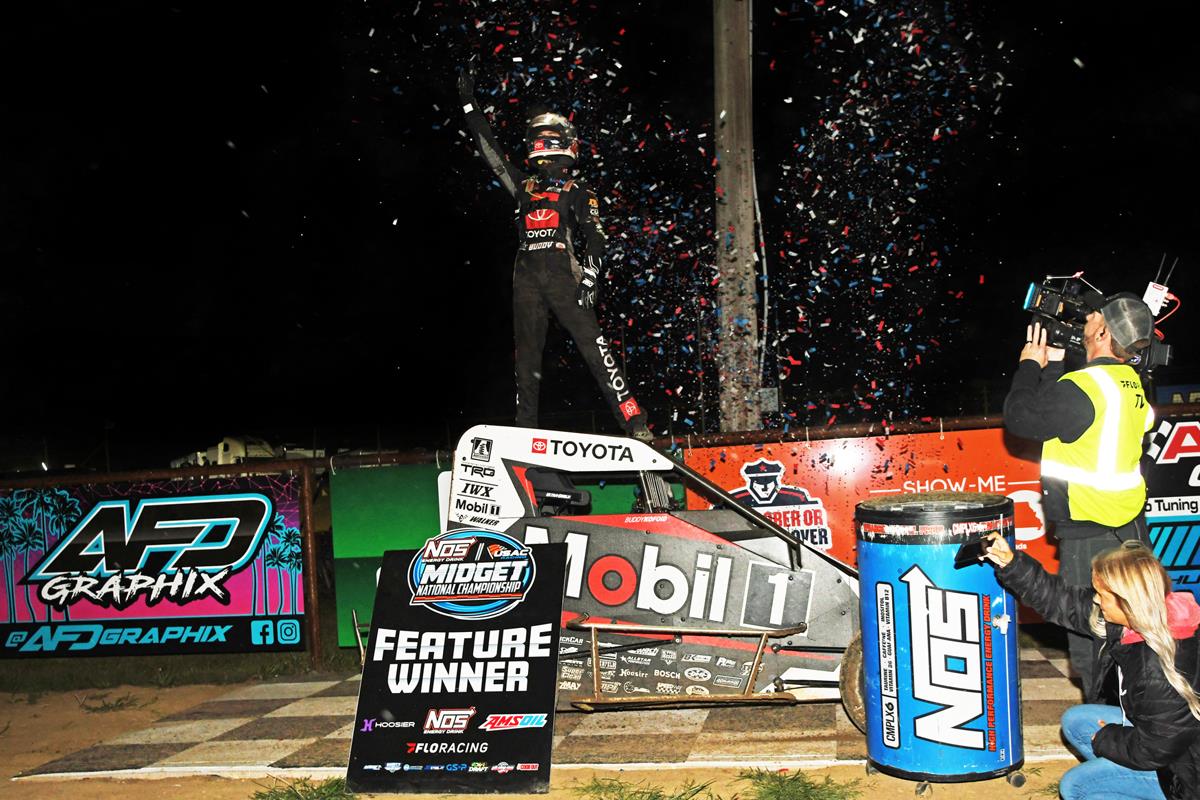 By Richie Murray, USAC Media (Sweet Springs, MO) -- One single night of absence from victory lane was all Buddy Kofoid and Keith Kunz/Curb-Agajanian Motorsports could stand.

The sixth place starting Kofoid trailed for the first 31 laps of the $5,021-to-win John Hinck Championship Presented By Dahmer Powertrain, relentlessly forging a path on the top side until it paid off by blazing past leader and bottom-feeding Zach Daum with nine laps remaining in a hard-fought, certifiably earned 40-lap main event that required him to carve out a path of his own doing.

“With Daum, he’s rarely going to slip off the bottom,” Kofoid rationalized of his decision to take an alternate route. “It was so hard; it took 200 percent effort to make the top work when it’s that far around to make it work. I don’t know if the bottom slickened up or if my car got better, but I was able to navigate the curb better the more I ran it and I kind of figured out where I could pick it up or get away from it or pick it back up again. Once I finally figured it out, I could tighten my car up as the race went on.”

Kofoid’s Sweet Springs victory was a monumental occasion as it made him the first driver since Jeff Gordon in 1990 to reach nine wins in a single USAC National Midget season and just one win shy of becoming the first driver to reach double-digits in that department since Rich Vogler in 1988.

The 18th career win by Kofoid also elevated him past Jay Drake and J.J. Yeley on the all-time USAC National Midget driver win list and into a tie with Dave Steele for 39th all-time.

In the same vein, the triumph provided Keith Kunz his 132nd career USAC National Midget victory as an entrant, leaving him just one shy of the all-time record of 133 held by Steve Lewis.

“(I’m) glad to get a bit of redemption from last night to get win number nine but to also get KKM closer to the top of the all-time win list,” Kofoid stated. “It would mean a lot and, if anything, I want to be the one to win the next two to get him tied and put him one ahead and also to get to double digits which would be cool.”

It was nearly déjà vu in a way for Kofoid at Sweet Springs. It was there in 2020 in which Cannon McIntosh opened up the weekend with a victory while Kofoid finished off the two-night fray as a victor. It was just the same in 2020 as McIntosh kicked things off with a victorious performance on Friday while Kofoid closed the curtain as a victory on Saturday night once more in his Mobil 1 – Toyota – TRD/Bullet By Spike/Speedway Toyota.

Initially, it was another one of KKM’s stable who ran up front at the beginning of the feature as pole sitter Cade Lewis led his first USAC laps while Daum made quick work from his fifth starting position to slot into second by lap three when he trekked the bottom past Daison Pursley.

After a yellow for ninth-running Chase McDermand who stopped in turn four on lap 12, the rerack put Daum right on the tail of series Rookie Lewis for the restart. Daum made Lewis pay and slipped under at the exit of turn four nearly a full lap following the restart all while Pursley was hitting the high line himself.

Pursley drove around the outside of Daum to take his turn up front on lap 15 to lead his first laps of the USAC season. Daum never wavered from the bottom berm and scooted back ahead of Pursley off turn two on the 18th lap. Then came Kofoid as he suddenly emerged as a contender when he began to clamp down on the front two at the halfway point.

While Daum maintained a steady presence on the low line, second running Pursley was looking high and low on both ends of the 1/5-mile dirt oval to find something, anything that could propel him forward post haste. With Daum operating the bottom and Pursley the top, that left the middle wide open for Kofoid to sneak through in turn three on lap 24 when he shot the gap, then slid up in front of Pursley into turn four to snag the spot.

The battle of differing track position strategies was on full display as Kofoid and Daum waged a high-low battle with neither able to gain much of an edge on the other. It was neck and neck between the two when Kofoid nosed ahead of Daum by a front bumper at the line to conclude lap 32 by a scant .001 second margin.

“I just knew I needed green laps and to hit it perfect to clear him,” Kofoid demonstrated. “My car started to get tight, and it made me nervous as it gave the lead back to him and I finally got it back.”

A yellow flag for a turn one spin by 24th running McDermand on lap 37 set up a four-lap trophy dash led by Kofoid. However, on the first lap of the resumption, Kofoid swung wide in turn two and did a light smooch with the outside wall, which brought Daum right back into the game as he briefly poked ahead of Kofoid on the back straightaway before missing out on the lead by a mere .004 second margin.

With Daum’s front left wheel draped off the infield berm, Kofoid took the opposite approach and placed his right rear within inches of the outer concrete to steadily distance himself from Daum, from a single car length on lap 38 to multiple lengths on lap 39.

On the final go-around, a pair of lengths behind, Daum skated over the berm and dry-heaved the left side nerf bar over it, scrubbing off his speed as well as any chance at victory. Pursley pounced on the situation and raced past Daum to take second, then slid through the middle to file in behind Kofoid.

Kofoid finished off the final stanza 0.558 seconds ahead of Pursley to collect the victory with Daum third, Bryant Wiedeman fourth (from 15th) and Kaylee Bryson fifth, advancing a whopping 17 positions after starting all the way back in 22nd.

It was a spectacular return to USAC competition for Daison Pursley as the Locust Grove, Okla. driver led two laps and grabbed a second place finish in his second series race back from injury in his Keith Kunz-Curb-Agajanian Motorsports/Bullet Chassis – TRD/Bullet By Spike/Speedway Toyota. The result marked Pursley's first top-two USAC National Midget run since a runner-up result 364 days earlier at South Dakota’s Huset's Speedway. Yet, he still felt it was an opportunity missed.

“I felt like we had a really good car there,” Pursley acknowledged. “(I’m) just disappointed. I felt like we got to the lead there fairly easier driving right through the middle. Zach was really good on the bottom and rooted me off the bottom when I changed my line up. I fell back pretty far, and I felt like I started trying too many things. I just went back to the basics on the last restart, and I was able to get through there.”

Zach Daum (Pocahontas, Ill.) came oh-so-close to picking up his first USAC National Midget feature win since 2014. He led a race-high 16 laps and finished third for the third time in his last four series starts behind the wheel of his Bundy Built Motorsports/5d Speed Shop – Whitz Racing Products/Spike/Bundy Built-PME Honda.

“Those last 10 laps, I just couldn’t carry as much speed around the bottom,” Daum pointed out. “(Kofoid) just had more momentum. I had to drag race and they were doing more momentum racing there. I just didn’t tighten up enough to make the bottom work late. We tried some different stuff tonight and we got it better. If it would’ve been 30 laps, we might’ve won the thing, but it was 40 tonight. We’ll write down what we did and just keep on going.”